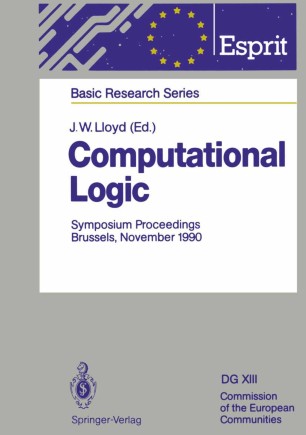 This volume has a dual significance to the ESPRIT Basic Research efforts towards forging strong links between European academic and industrial teams carrying out research, often interdisciplinary, at the forefront of Information Technology. Firstly, it consists of the proceedings of the "Symposium on Computational Logic" - held on the occasion of the 7th ESPRIT Conference Week in November 1990 - whose organisation was inspired by the work of Basic Research Action 3012 (COMPULOG). This is a consortium which has attracted world-wide interest, with requests for collaboration throughout Europe, the US and Japan. The work of COMPULOG acts as a focal point in this symposium which is broadened to cover the work of other eminent researchers in the field, thus providing a review of the state of the art in computational logic, new and important contributions in the field, but also a vision of the future. Secondly, this volume is the first of an ESPRIT Basic Research Series of publications of research results. It is expected that the quality of content and broad distribution of this series will have a major impact in making the advances achieved accessible to the world of academic and industrial research alike. At this time, all ESPRIT Basic Research Actions have completed their first year and it is most encouraging and stimulating to see the flow of results such as the fine examples presented in this symposium.