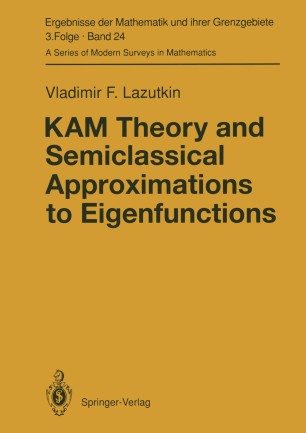 It is a surprising fact that so far almost no books have been published on KAM theory. The first part of this book seems to be the first monographic exposition of this subject, despite the fact that the discussion of KAM theory started as early as 1954 (Kolmogorov) and was developed later in 1962 by Arnold and Moser. Today, this mathematical field is very popular and well known among physicists and mathematicians. In the first part of this Ergebnisse-Bericht, Lazutkin succeeds in giving a complete and self-contained exposition of the subject, including a part on Hamiltonian dynamics. The main results concern the existence and persistence of KAM theory, their smooth dependence on the frequency, and the estimate of the measure of the set filled by KAM theory. The second part is devoted to the construction of the semiclassical asymptotics to the eigenfunctions of the generalized Schrödinger operator. The main result is the asymptotic formulae for eigenfunctions and eigenvalues, using Maslov`s operator, for the set of eigenvalues of positive density in the set of all eigenvalues. An addendum by Prof. A.I. Shnirelman treats eigenfunctions corresponding to the "chaotic component" of the phase space.