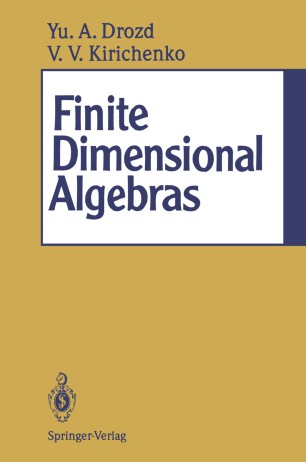 This English edition has an additional chapter "Elements of Homological Al­ gebra". Homological methods appear to be effective in many problems in the theory of algebras; we hope their inclusion makes this book more complete and self-contained as a textbook. We have also taken this occasion to correct several inaccuracies and errors in the original Russian edition. We should like to express our gratitude to V. Dlab who has not only metic­ ulously translated the text, but has also contributed by writing an Appendix devoted to a new important class of algebras, viz. quasi-hereditary algebras. Finally, we are indebted to the publishers, Springer-Verlag, for enabling this book to reach such a wide audience in the world of mathematical community. Kiev, February 1993 Yu.A. Drozd V.V. Kirichenko Preface The theory of finite dimensional algebras is one of the oldest branches of modern algebra. Its origin is linked to the work of Hamilton who discovered the famous algebra of quaternions, and Cayley who developed matrix theory. Later finite dimensional algebras were studied by a large number of mathematicians including B. Peirce, C.S. Peirce, Clifford, ·Weierstrass, Dedekind, Jordan and Frobenius. At the end of the last century T. Molien and E. Cartan described the semisimple algebras over the complex and real fields and paved the first steps towards the study of non-semi simple algebras.