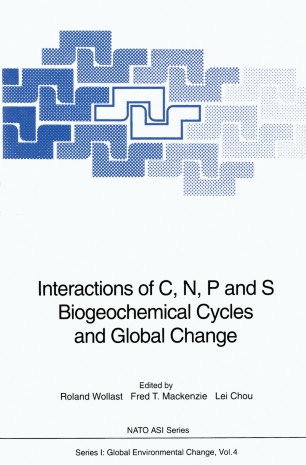 This book is a natural extension of the SCOPE (Scientific Committee of Problems on the Environment) volumes on the carbon (C), nitrogen (N), phosphorus (P) and sulfur (S) biogeochemical cycles and their interactions (Likens, 1981; Bolin and Cook, 1983). Substantial progress in the knowledge of these cycles has been made since publication of those volumes. In particular, the nature and extent of biological and inorganic interactions between these cycles have been identified, positive and negative feedbacks recognized and the relationship between the cycles and global environmental change preliminarily elucidated. In March 1991, a NATO Advanced Research Workshop was held for one week in Melreux, Belgium to reexamine the biogeochemical cycles of C, N, P and S on a variety of time and space scales from a holistic point of view. This book is the result of that workshop. The biogeochemical cycles of C, N, P and S are intimately tied to each other through biological productivity and subsequently to problems of global environmental change. These problems may be the most challenging facing humanity in the 21 st century. In the broadest sense, "global change" encompasses both changes to the status of the large, globally­ connected atmospheric, oceanic and terrestrial environments (e. g. tropospheric temperature increase) and change occurring as the result of nearly simultaneous local changes in many regions of the world (e. g. eutrophication).