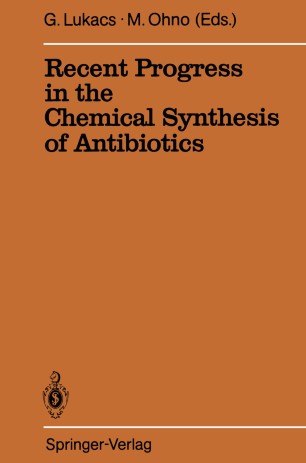 Recent Progress in the Chemical Synthesis of Antibiotics

The use of antibiotics in the treatment by antibacterial and antifungal chemo­ therapy, has become standard practice since the end of World War Two and has had an enormous impact on healthcare throughout the world. Compounds belonging to this class have also reached an important place in the medical treatment of human cancer. Although, the discovery of most of these agents came from more or less sophisticated screening programs of soil microrganisms, many of the important antibiotics used today in clinical practice are derived from the original biosynthetic products by the application of often novel and generally elaborated chemical synthetic methodologies. In fact the antibiotics have represented (and still represent) for a generation of organic chemists an endless source of molecular structures whose varied assemblage of carbon atom backbones and chemical functions was beyond any possibility of imagination. Perhaps a similar repertoire of chemotypes was formerly offered by the natural products, namely the alkaloids, the terpenes, the vitamins and hormones as well as the pigments of the animal and plant kingdoms, albeit the chemical arrange­ ments of the antibiotic molecules appeared much more surprising and diverse to the admiring eyes of cultivated organic chemists. The idea of this book, certainly a landmark in the field, came during the Symposium of EUCHEM on Chemical Synthesis of Antibiotics, that was held at Aussois in Savoy, France (May 2-6, 1988), the initiative being taken by Gabor Lukacs to whom Masaji Ohno readily associated as a co-editor.