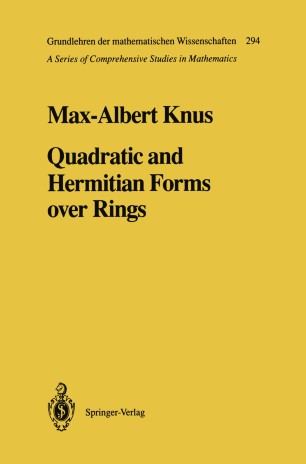 Quadratic and Hermitian Forms over Rings

From its birth (in Babylon?) till 1936 the theory of quadratic forms dealt almost exclusively with forms over the real field, the complex field or the ring of integers. Only as late as 1937 were the foundations of a theory over an arbitrary field laid. This was in a famous paper by Ernst Witt. Still too early, apparently, because it took another 25 years for the ideas of Witt to be pursued, notably by Albrecht Pfister, and expanded into a full branch of algebra. Around 1960 the development of algebraic topology and algebraic K-theory led to the study of quadratic forms over commutative rings and hermitian forms over rings with involutions. Not surprisingly, in this more general setting, algebraic K-theory plays the role that linear algebra plays in the case of fields. This book exposes the theory of quadratic and hermitian forms over rings in a very general setting. It avoids, as far as possible, any restriction on the characteristic and takes full advantage of the functorial aspects of the theory. The advantage of doing so is not only aesthetical: on the one hand, some classical proofs gain in simplicity and transparency, the most notable examples being the results on low-dimensional spinor groups; on the other hand new results are obtained, which went unnoticed even for fields, as in the case of involutions on 16-dimensional central simple algebras. The first chapter gives an introduction to the basic definitions and properties of hermitian forms which are used throughout the book.