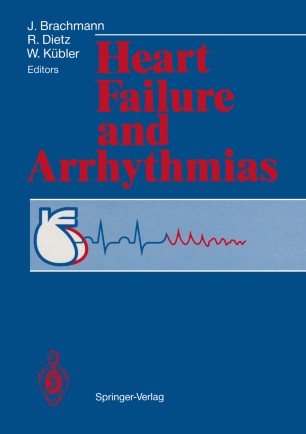 Heart failure is a clinical entity characterized by a certain combination of symptoms and signs. Although there is neither a definition covering all aspects of it nor any generally accepted criteria for evaluating its severity, it is the endstage of many different heart diseases, in most cases associated with a poor prognosis. Approximately 50% of the patients with advanced heart failure die from pump failure, whereas the other half succumb suddenly and unexpectedly due to ventricular tachyar­ rhythmias. Although impaired left ventricular function is the main risk factor, sudden death may already occur in less severe cases of heart failure. In certain cardiac diseases, such as dilative cardiomyopathy, the occurrence of ventricular arrhythmias may be related directly to the underlying heart disease, as the frequency and severity (Lown classifica­ tion) of ventricular ectopics are not related to left ventricular impair­ ment. Treatment of ventricular tachyarrhythmias is still an unsolved prob­ lem, especially in patients with heart failure, who need it the most. The vast majority of antiarrhythmic agents are more or less negatively ino­ tropic and may therefore substantially aggravate ventricular impair­ ment. Nonpharmacological approaches - such as the implantation of a defibrillator - still require major surgery with the associated increased risk to the patient in heart failure. No agreement has yet been reached on the criteria for evaluating how effective treatment has been, either for heart failure or for ventricular tachyarrhythmias.