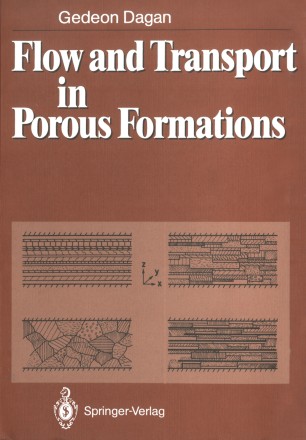 Flow and Transport in Porous Formations

In the mid-seventies, a new area of research has emerged in subsurface hydrology, namely sto­ chastic modeling of flow and transport. This development has been motivated by the recognition of the ubiquitous presence of heterogeneities in natural formations and of their effect upon transport and flow, on the one hand, and by the vast expansion of computational capability provided by elec­ tronic machines, on the other. Apart from this, one of the areas in which spatial variability of for­ mation properties plays a cardinal role is of contaminant transport, a subject of growing interest and concern. I have been quite fortunate to be engaged in research in this area from its inception and to wit­ ness the rapid growth of the community and of the literature on spatial variability and its impact upon subsurface hydrology. In view of this increasing interest, I decided a few years ago that it would be useful to present the subject in a systematic and comprehensive manner in order to help those who wish to engage themselves in research or application of this new field. I viewed as my primary task to analyze the large scale heterogeneity of aquifers and its effect, presuming that the reader already possesses a background in traditional hydrology. This is achieved in Parts 3, 4 and 5 of the text which incorporate the pertinent material.