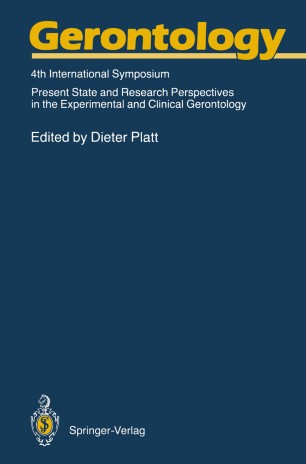 At the beginning of the century the average life span in developed societies was less than 50 years. It is now more than 70 years and will continue to increase in the near future. Aging is a challenge to science and society. There are several theories of aging. The programmed aging hypothesis suggests that aging cannot be altered by any external influence, that aging is programmed from the beginning of life until the end of senescence. Another theory is based on genetic instability, with repair processes correcting errors in the cells that cause aging. Aging processes manifest themselves at the molecular and cellular level, in different organs, and in the whole organism. Most older persons acquire multiple diseases, primarily chronic ones. The multimorbidity of the elderly raises many questions as to nutrition, metabolism, immunity, drug therapy, and rehabilitation. Nutrition may be able to intervene in the aging process. Aging is associated with dec­ lining immunity and reduced resistance to many diseases, and it is pos­ sible that nutritional changes in old age contribute to the declining immunity in the elderly. The elderly take 40% of the prescription drugs in Germany and adverse drug reactions are more frequent in geriatric patients. There are not only problems in drug therapy for elderly pa­ tients, but also in their rehabilitation. The aim of rehabilitation is the restoration of geriatric patients to their former functional and environ­ mental status.