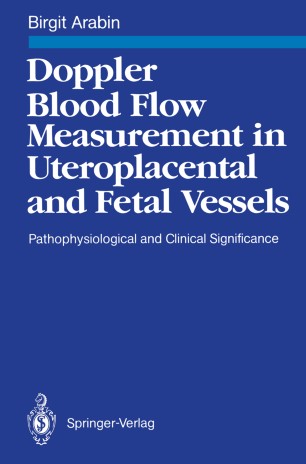 Doppler ultrasound is a hot topic at the present time. This is because studies of the uteroplacental and fetal circulation give fundamental information as to the physiology or pathology of placental function and the response of the fetal circulation to hypoxaemia. Dr. Arabin's clinical studies which are described in this book are an important contribution to knowledge in this field and will be of enormous interest not only to researches but also to clini­ cians interested in learning how this latest technology can be integrated into their clinical practice. London STUART CAMPBELL Foreword Although only three decades old, the field of perinatal medicine is marked by continuous new advances. Ultrasound diagnostic techniques comprise an important element of this new field. Dr. Arabin has taken the initiative to investigate the functional-diagnostic aspects of ultrasound. Among other things, she has further developed and refined the concept of "oxygen-con­ serving adaptation of fetal circulation" which originated in the Department of Obstetrics and Gynecology at the Neukolln Hospital Center in 1966. She thus has been able to show that the most reliable Doppler blood flow meas­ urement predictors of a high risk to the fetus are (1) a decrease in the flow volume of the descending thoracic aorta and the umbilical artery and (2) an increase in the flow volume of the common carotid arteries.