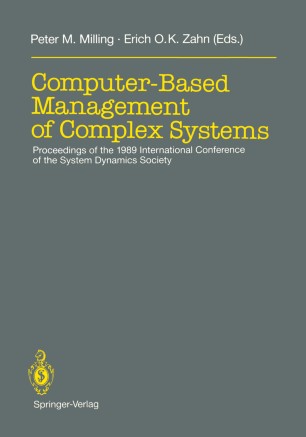 Proceedings of the 1989 International Conference of the System Dynamics Society, Stuttgart, July 10–14, 1989

Especially during the last decade, the systems approach gained wide spread attention and increased influence in the world of academics and business. The holistic view of how individual elements interact with ea~h other to form an entity -not a collection of isolated parts -becomes more and more important. Whether it is called "integration" as in Computer Integrated Manufacturing, "organism" in ecological studies, or "network" like the communication network, it is the system's idea which opens neVI' dimensions for insights, applications and development. System Dynamics -or Industrial Dynamics as it was called during its early years by its founder and mentor, M.I.T.'s now Professor Emeritus Jay W. Forrester, -pioneered the use of system concepts and computer simulation for the analysis of complex problems in business and management. It was applied to study the dynamics of corporations, cities, national economies and, finally, the global problems of man and in his limited and fragile environment. The field has reached a stage of self sustained development and momentum. A few years ago the System Dynamics Society was founded, a high quality academic journal is now published in its fifth volume, and the annual International Conferences of the Society were institutionalized and took place in America, Europe and Asia. The organization of international meet· ings for this scientific community, however, is older than the System Dynamics Society itself. The first conventions were held as special sections of conferences devoted to simulation or cybernetics.