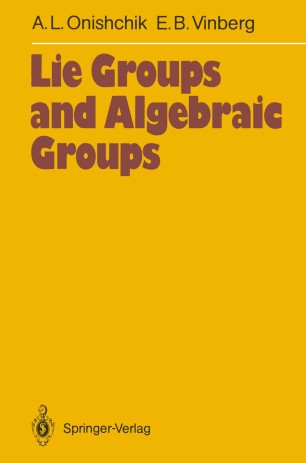 This book is based on the notes of the authors' seminar on algebraic and Lie groups held at the Department of Mechanics and Mathematics of Moscow University in 1967/68. Our guiding idea was to present in the most economic way the theory of semisimple Lie groups on the basis of the theory of algebraic groups. Our main sources were A. Borel's paper [34], C. ChevalIey's seminar [14], seminar "Sophus Lie" [15] and monographs by C. Chevalley [4], N. Jacobson [9] and J-P. Serre [16, 17]. In preparing this book we have completely rearranged these notes and added two new chapters: "Lie groups" and "Real semisimple Lie groups". Several traditional topics of Lie algebra theory, however, are left entirely disregarded, e.g. universal enveloping algebras, characters of linear representations and (co)homology of Lie algebras. A distinctive feature of this book is that almost all the material is presented as a sequence of problems, as it had been in the first draft of the seminar's notes. We believe that solving these problems may help the reader to feel the seminar's atmosphere and master the theory. Nevertheless, all the non-trivial ideas, and sometimes solutions, are contained in hints given at the end of each section. The proofs of certain theorems, which we consider more difficult, are given directly in the main text. The book also contains exercises, the majority of which are an essential complement to the main contents.