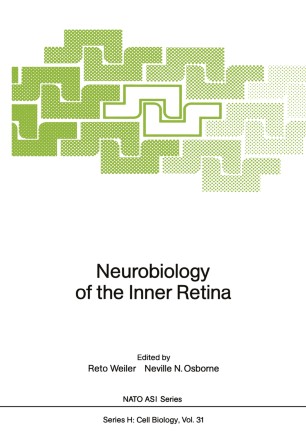 Neurobiology of the Inner Retina

The relatively simple, stratified nature of the retina and its spe- fied use in the visual process has long made it an inviting tissue to study both for its own sake and as a model for the more complex processes of the brain. For these dual purposes, the retina can be thought of as basically consisting of two functional pans. First, the outer retina, comprised of the photoreceptor cells and attendant pigment epithelium, serves to capture the photic energy and convert it into a neurochemical response. Second, the inner layers of the retina, mainly bipolar, amacrine and ganglion cells (and their attendant Maller cells), function more clearly as a typical part of the CNS, transmitting the photic signals to the brain. Between the 8th and 12th of August 1988 more than seventy scientists from allover the world gathered in Oldenburg (Federal Republic of Gennany) for a meeting "The neurobiology of the inner retina" which was devoted entirely to the neural mechanism of the inner synaptic layer of the verte­ brate retina. The meeting comprised twenty - three separate lectures and four specially arranged discussion groups. In addition, a number of posters were displayed and a period was allotted specifically for the discussion of these posters. The articles contained in this book will serve as a record of the papers delivered at the Oldenburg Meeting and illustrate the advances made in trying to understand the importance of the diversity of amacrine cell morphology and physiology in retinal function.