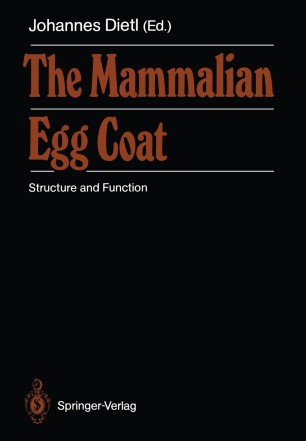 Publication of this monograph acknowledges great strides made in research on the zona pellucida during the past decade or so. The body of work presented testifies to a resurgence of interest in the zona pellucida, prompted largely by a renewed appreciation of its unique properties and its important functions during early mam­ malian development. It is gratifying to realize that the zona pellucida has at last achieved a well-deserved attention. Whereas extracellular coats of nonmammalian eggs have been studied intensively for many years, the zona pellucida by comparison, has until now taken a back seat. Fortunately, the research presented here signals an end to this situ­ ation. Many of the difficulties inherent in working with relatively small amounts of material have been overcome, paving the way for application of a wider variety of experimental approaches to the zona pellucida by a larger community of investigators. Hopefully, this monograph will serve as a catalyst in this regard. As revealed in these pages, application of contemporary experi­ mental methodologies has had significant impact on both pure and applied research on the zona pellucida. For example, modem im­ munological approaches have been used to assess molecular fea­ tures of zona pellucida structure and function, as well as to evalu­ ate the zona pellucida as a potential contraceptive target antigen.