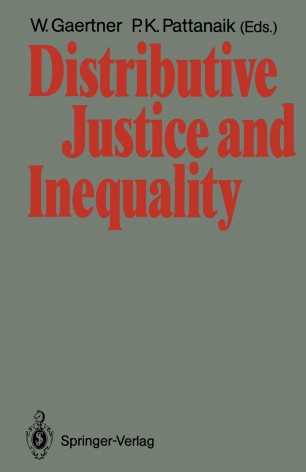 A Selection of Papers Given at a Conference, Berlin, May 1986

From May 20 to May 24, 1986 a conference on distributive justice and in­ equality was held at the Institute for Advanced Study Berlin (Wis­ senschaftskolleg zu Berlin). More than thirty scholars participated in this conference. The topics of the presentations ranged from ethics, welfare economics and social choice theory to characterizations of inequality meas­ ures and redistributive taxation schemes. This book contains a selection of the papers given at the conference. This collection of articles also appeared as issues 2 and 3 of volume 5 of Social Choice and Welfare. In the first paper P. Suppes argues for a pluralistic concept of equity. For too long the emphasis has been on income distribution but there are other characteristics which are important when one talks about equity. Suppes suggests that it would be desirable to have Lorenz curves for a variety of fea­ tures of societies, such as education, health and housing. P. Dasgupta studies the quality of lives in terms of an index of living stand­ ards. One has to distinguish between "same number choices" (the number of lives is given) and "different numbers choices" (problem of optimum popUlation). The author argues that in the latter case the anonymity (or sym­ metry) axiom cannot be readily defended. Once it is dropped, however, an incoherence in the moral ordering of possible worlds arises. The moral basis for different numbers choices becomes generation-dependent, an overall moral ordering of possible worlds no longer exists.