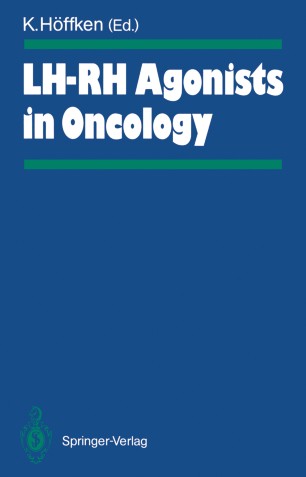 Hormonal treatment of malignant diseases came of age quite some years ago. Nevertheless, developments in this field are still progressing at a steady pace. During recent years, the detection of new endocrine feedback loops and the availability of new classes of hormonal agents made it possible to predictively interfere with hor­ mone actions. Besides the intellectual challenge of modulating the hormone system, there is an important new aspect associated with recent research on hormones and cancer: new developments have generally led to a reduction in treatment-induced morbidity. As aromataseinhibitors are substituted for adrenalectomy, controlled interference with the hypothalamic-gonadotrophic axis is likely to replace surgical removal of the relevant glands, i. e. , the pituitary gland or the gonads. With the detection of the luteinizing hormone releasing hormone (LH-RH), its structural analysis, and the synthesis of analogs of this decapeptide hormone, a tool became available not only for treatment of sterility or endometriosis but also for switching off gonadal activity in a reversible manner. Evidence has accumulated over the past few years that LH-RH agonists can serve as "medical orchiectomy" in prostate cancer. As a logical consequence, hypogonadotropic gonadal insufficiency induced by LH-RH agonists was investigated in patients with breast cancer. Of equal importance were the attempts to prevent infertility from cytostatic drugs by temporar­ ily suspending gonadal function.