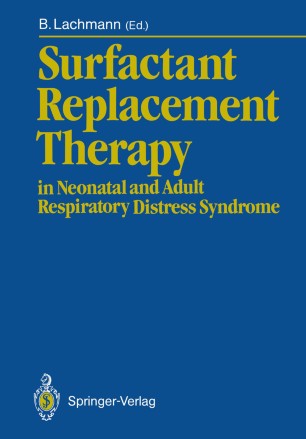 I am very happy and honoured to have so many famous contrib­ utors from around the world presenting their knowledge and experience in this book, including Dr. Rufer who, as early as 1967, attempted to improve the pressure-volume curve of a child dying from RDS using dried surfactant from dogs; Drs. Enhorn­ ing and Robertson who were the first to treat rabbit fetuses with surfactant replacement and impressively demonstrated that sur­ factant improved lung mechanics; and Dr. Fujiwara who at the end of the 1970's had already successfully treated the first babies with surfactant replacement and published this work al­ ready in 1980. Thus, the idea of surfactant replacement therapy is now more or less 20 years old and almost 10 years have passed since the first publication by Dr. Fujiwara of his impressive clinical results. Up to now (September, 1988) about 2,200 babies have been treated worldwide with tracheal instillation of surfactant, with most promising results. The type of surfactant used varies from pure natural extracts from bovine or pig lungs, to surfactant extracted from human amniotic fluid, to pure phospholipids. To date, however, there is still no surfactant commercially available (except in Japan), in spite of the fact that it is urgently awaited by neonatologists and intensive care doctors throughout the world. This volume is based on the contributions presented at the international congress on Surfactant Replacement Therapy which was held in Rotterdam, The Netherlands, in November 1987.