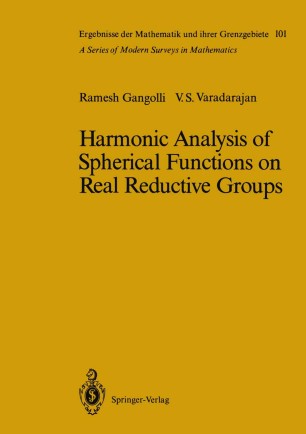 Analysis on Symmetric spaces, or more generally, on homogeneous spaces of semisimple Lie groups, is a subject that has undergone a vigorous development in recent years, and has become a central part of contemporary mathematics. This is only to be expected, since homogeneous spaces and group representations arise naturally in diverse contexts ranging from Number theory and Geometry to Particle Physics and Polymer Chemistry. Its explosive growth sometimes makes it difficult to realize that it is actually relatively young as mathematical theories go. The early ideas in the subject (as is the case with many others) go back to Elie Cart an and Hermann Weyl who studied the compact symmetric spaces in the 1930's. However its full development did not begin until the 1950's when Gel'fand and Harish­ Chandra dared to dream of a theory of representations that included all semisimple Lie groups. Harish-Chandra's theory of spherical functions was essentially complete in the late 1950's, and was to prove to be the forerunner of his monumental work on harmonic analysis on reductive groups that has inspired a whole generation of mathematicians. It is the harmonic analysis of spherical functions on symmetric spaces, that is at the focus of this book. The fundamental questions of harmonic analysis on symmetric spaces involve an interplay of the geometric, analytical, and algebraic aspects of these spaces. They have therefore attracted a great deal of attention, and there have been many excellent expositions of the themes that are characteristic of this subject.