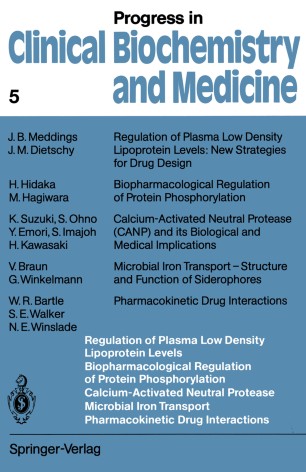 Part of the Progress in Clinical Biochemistry and Medicine book series (PCBM, volume 5)

Cholesterol is essential for normal cellular function. It is found in all cells of the body and is a major constituent of cell membranes. In addition, certain specialized tissues use cholesterol as the basic substrate for the synthesis of more complicated sterols such as bile acids and the steroid hormones. Like most lipids cholesterol has a very low solubility in water. Therefore, in order for these molecules to be transported be­ tween different organs of the body a series of lipid carriers known as lipoproteins has evolved. Over the last several years epidemiological evidence has accumulated suggest­ ing a strong relationship between the risk of atherosclerosis and high plasma concen­ trations of one of these lipoproteins, low density lipoprotein (LDL) 1). Thus, in popula­ tions with high plasma concentrations of LDL-cholesterol a correspondingly high incidence of vascular disease is seen. Since it has been demonstrated that reducing the steady-state plasma LDL-cholesterol concentration produces a proportional decrease in the risk of developing atherosclerosis 2), a major effort is now underway to develop safe and effective lipid lowering agents. In the past, these efforts have been hampered by a lack of knowledge concerning the physiological regulation of the plasma LDL-cholesterol concentration. However, recently there have been several major advances in these areas and it is now possible to precisely determine those factors that have the greatest effect on either increasing or decreasing the plasma LDL-cholesterol concentration.