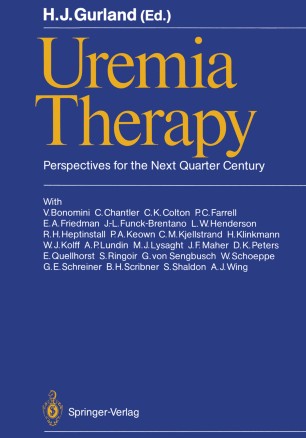 Perspectives for the Next Quarter Century

Little doubt exists that hemodialysis represents a major event in the course of modern medicine. Technologies which had previously been considered heroic or appropriate only in intensive care settings became so commonplace as to be conducted at home or in limited-care settings. The chronic anephric mammal, absent from the Darwinian evolution, was created and grew rapidly in number to a total population base of nearly one-quarter million. The physiology of this new "species" was defined, and methods of managing its pathophysiologies were developed and refined. A subspeciality of medicine and a multi-billion dollar industry were born. And the requisite dedication of resources, effort, and man­ power raised hitherto unheard questions about the limits to growth of high­ technology on medicine. At Rottach-Egern, a small village nestled in the foothills of the Bavarian Alps, many (perhaps most) of the founders and pioneers of renal dialysis assembled in June of 1986 in order to reflect upon the progress and problems of the first 25 years of hemodialysis and to establish vectors and directions for the coming quarter century. Sadly missing were Drs. Nils Alwall and John Merrill who died during the years this conference was in planning. But present and active were Drs. Kolff and Scribner, whose breakthrough contributions represent the cardi­ nal landmarks of the development of contemporary End Stage Renal Disease therapy.