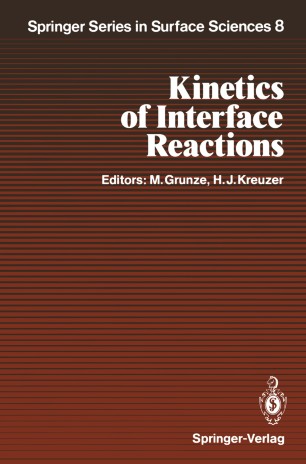 This book contains the proceedings of the first Workshop on Interface Phenomena, organized jointly by the surface science groups at Dalhousie University and the University of Maine. It was our intention to concentrate on just three topics related to the kinetics of interface reactions which, in our opinion, were frequently obscured unnecessarily in the literature and whose fundamental nature warranted an extensive discussion to help clarify the issues, very much in the spirit of the Discussions of the Faraday Society. Each session (day) saw two principal speakers expounding the different views; the session chairmen were asked to summarize the ensuing discussions. To understand the complexity of interface reactions, paradigms must be formulated to provide a framework for the interpretation of experimen­ tal data and for the construction of theoretical models. Phenomenological approaches have been based on a small number of rate equations for the concentrations or mole numbers of the various species involved in a par­ ticular system with the relevant rate constants either fitted (in the form of the Arrheniusparametrization) to experimental data or calculated on the basis of microscopic models. The former procedure can at best serve as a guide to the latter, and is, in most cases, confined to ruling out certain reaction pathways rather than to ascertaining a unique answer.