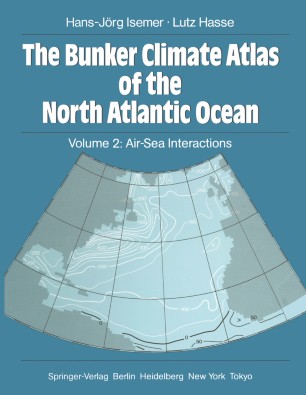 The Bunker Climate Atlas of the North Atlantic Ocean

Marine Meteorology has a long tradition, and studies of surface meteorological conditions have been published repeatedly since the end of the last century. Recently, the demand has grown for more detailed descriptions. This stems both from the public's interest in climatic change and from our growing ability to analyse atmospheric and oceanic processes with the aid of numerical models. These models require input data on a regular, finely spaced grid; the increased amount of oceanic data available permits us to provide detailed charts both of surface meteorological conditions and of air-sea interactions. The present atlas deals with the surface climate of the North Atlantic Ocean from the equator to 65°N, in the period 1941 to 1972. It is based on data originally evaluated by Andrew F. Bunker of Woods Hole Oceanographic Institution. He analysed observations from the ships of the Voluntary Observing Fleet in many parts of the world ocean to calculate the various components of the heat budget at the air-sea interface. When Bunker died in 1979, he left the major part of his data and results in an unpublished state. Since he had spent considerable effort on validating the data and calculating air-sea fluxes by the so-called individual method, it was considered worthwhile to make this unique set of climate data available to the scientific community. The observed meteorological quantities are presented in Volume 1 of this atlas. Volume 2 contains the air-sea interaction fluxes.