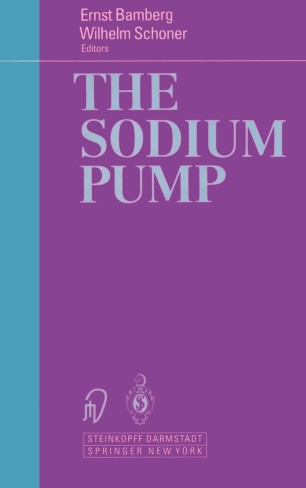 Structure Mechanism, Hormonal Control and its Role in Disease

The sodium of animal cell membranes converts the chemical energy obtained from the hydrolysis of adenosine 5' -triphosphate into a movement of the cations Na + and K + against an electrochemical gradient. The gradient is used subse­ quently as an energy source to drive the uptake of metabolic substrates in polar epithelial cells and to use it for purposes of communications in excitable cells. The biological importance of the sodium pump is evident from the fact that be­ tween 20-70% of the cell's metabolic energy is consumed for the pumping pro­ cess. Moreover, the sodium pump is an important biological system involved in regulatory processes like the maintenance of the cells' and organism's water me­ tabolism. It is therefore understandable that special cellular demands are han­ dled better by special isoforms of the sodium pump, that the expression of the sodium pump and their isoforms is regulated by hormones as is the activity of the sodium pump via hormone-regulated protein kinases. Additionally, the sodium pump itself seems to be a receptor for a putative new group of hormones, the endogenous digitalis-like substances, which still have to be defined in most cases in their structure. This group of substances has its chemically well known coun­ terpart in steroids from plant and toad origin which are generally known as "car­ diac glycosides". They are in medical use since at least 200 years in medicine in the treatment of heart diseases.