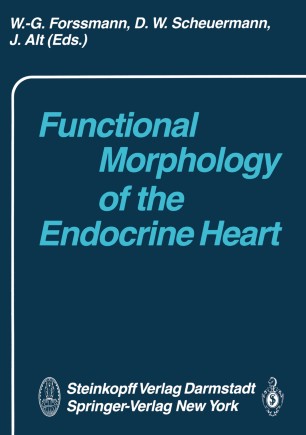 Functional Morphology of the Endocrine Heart

In 1956, Bruno Kisch (90) discovered a special form of myocyte in the guinea pig heart atrium which contained peculiar, dense inclusions, but it was not before the early 1980s that cardiac hormones were isolated and characterized independently and almost simultaneously by several working groups. In 1964 Jamieson and Palade (84) were the first to postulate the secretory nature of the atrial myocytes and their specific granules. In 1976, Marie et al. (103) revealed the relation of the granular index of these atrial cells with the water- electrolyte balance of the body fluid. The biological effects of purified atrial extracts, i. e. , the diuretic and vasorelaxant effects, were detected in the early 1980s, (26,35,38,56). Now, a series of polypeptides, of the same family, and all derived from a homologous precursor in the different species are know to exert the diuretic and vasorelaxant effects. This development of the discovery of a peptide hormone is unparalleled in the sense that it was mostly morphologists who contributed to the final characterization of these cardiac hormones. Thus, it was a great honor for us to be given the opportunity on the occasion of the 8th European Anatomical Congress to organize a special satellite symposium on the rapidly growing field of research in cardiac endocrinology. The symposium "Functional Endocrinology of the Endocrine Heart" was planned as an interdisciplinary meeting to enable anatomists to follow recent advances in cardiac endocrinology.