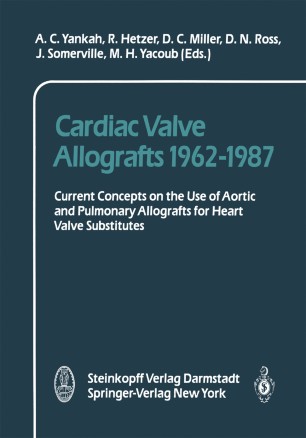 It was the genius of Gordon Murray in Toronto that introduced the use of allografts into cardiac surgery in the 1950s. Soon after this on opposite sides ofthe world, Sir Brian Barratt-Boyes in Auckland, New Zealand, and Mr. Donald Ross in London, undertook to use allografts for the replacement of diseased aortic valves. Since that time the global interest in allografts has been patchy, episodic, and without a con­ sensus. Nonetheless, for the last 20 years at least three groups in the world have steadfastly pursued the development of new and relevant information concerning the use of allograft valves in humans. These are the centres of Sir Brian Barratt­ Boyes, Mr. Donald Ross, and Mark O'Brien in Brisbane. More recently, talented investigators, including Drs. Yankah, Yacoub, and others, have been developing information concerning the immunological aspects of the use of allografts, as well as their clinical use. No doubt, at present, cardiac valve allografts of one sort or another are the devices of choice for conduits and have an important place in the surgery of aortic valve replacement. Even so, in the mind of this writer at least, the future usefulness of allografts for the replacement of diseased cardiac valves and conduits between a ventricle and the pulmonary artery, remains problematic, and depends upon improvements in other devices for this purpose and upon improve­ ments that may be made in preparing and using allografts.