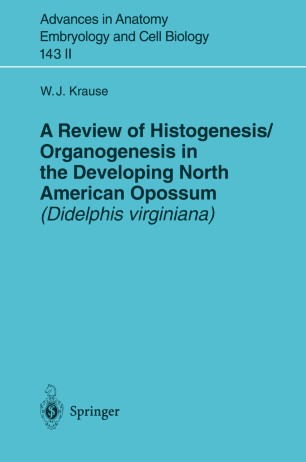 A renewed interest is beginning to emerge recognizing the potential of marsupials as unique models for biomedical research. Because of their abbreviated period of intrauterine development, marsupials are accessible models with which to study the early development of mammalian organ systems. The North American opossum (Didelphis virginiana) has received more scientific scrutiny than any other marsupial to date. The purpose of volumes I and II is twofold. The first goal is to draw together and briefly summarize the morphologal events and supporting quantitative data concerned with the histogenesis/organogenesis of the various organ systems in this particular species. The second goal is to provide an introduction into the literature with regard to the biology of Didelphis virginiana and to gather together a variety of studies that have focused on this species. Volume I summarizes gametes and fertilization, blastocyst formation and early organogenesis, fetal membranes and placentation, parturition and migration to the pouch, general postnatal growth and development, and histogenesis/organogenesis of the integument, musculoskeletal system, cardiovascular system, blood and blood forming organs, lymphatic organs, nervous system, eye, and ear. Volume II summarizes the histogenesis/organogenesis of the respiratory system, digestive system, urinary system, male reproductive system, female reproductive system, and classical endocrine system.