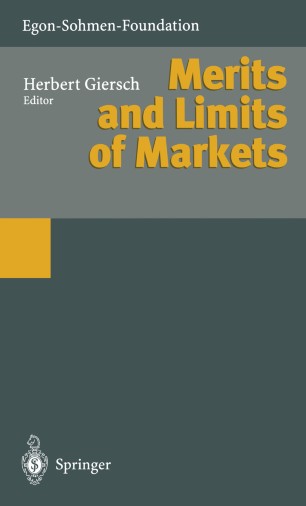 Merits and Limits of Markets

The 1997 Symposium of the Egon-Sohmen-Foundation, which gave rise to this book, took place in the United States, on the East Coast between New Y C)rk and New Haven, more precisely in Stamford (Conn.). The original choice had been a place close to Yale University, where Egon Sohmen taught economics from 1958 to 1960, subsequent to his period at MIT. But the hotel in New Haven was closed down by a new owner-to pass through a process of creative destruction. Change of ownership-on a large scale and as a transition from public to private hands-had been the topic of the preceding Egon­ Sohmen-Symposium (in Budapest in 1996) published under the head­ ing: Privatization at the End of the Century (Springer-Verlag, 1997). Yet mere change of ownership, some of us at the Foundation felt in subsequent months, was too narrow a focus to properly deal with the movement under consideration: a transition of ownership together with a general move towards a competitive market system charac­ terized by global openness, uncertainty, decentralized risk-bearing, and the increasing importance of information and innovation.