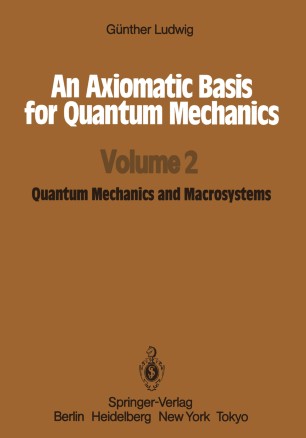 An Axiomatic Basis for Quantum Mechanics

In the first volume we based quantum mechanics on the objective description of macroscopic devices. The further development of the quantum mechanics of atoms, molecules, and collision processes has been described in [2]. In this context also the usual description of composite systems by tensor products of Hilbert spaces has been introduced. This method can be formally extrapolated to systems composed of "many" ele­ mentary systems, even arbitrarily many. One formerly had the opinion that this "extrapolated quantum mechanics" is a more comprehensive theory than the objec­ tive description of macrosystems, an opinion which generated unsurmountable diffi­ culties for explaining the measuring process. With respect to our foundation of quan­ tum mechanics on macroscopic objectivity, this opinion would mean that our founda­ tion is no foundation at all. The task of this second volume is to attain a compatibility between the objective description of macrosystems and an extrapolated quantum mechanics. Thus in X we establish the "statistical mechanics" of macrosystems as a theory more compre­ hensive than an extrapolated quantum mechanics. On this basis we solve the problem of the measuring process in quantum mechan­ ics, in XI developing a theory which describes the measuring process as an interaction between microsystems and a macroscopic device. This theory also allows to calculate "in principle" the observable measured by a device. Neither an incorporation of consciousness nor a mysterious imagination such as "collapsing" wave packets are necessary.