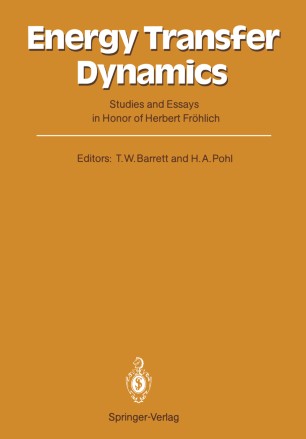 On three occasions and at different locations, conferences were held to honor the eightieth birthday of Professor Herbert Frohlich: on the 18th December, 1985, in Liverpool, England; on the 14th February, 1986, in Stuttgart, Germany; and on the 8th March, 1986, on the Palm Coast, Florida. This Festschrift is a compilation of the papers of those conferences. Frohlich's choice of problems, from the earliest days, was couched in the phy­ sics of intrinsically interacting systems of excitation. One example, in which he set the course of research which is still followed, concerned dielectric breakdown, developed from the 1930's over several decades. The interacting systems are the electrons (receiving energy from an electric field) and lattice atom motion (taking energy from the electrons via "electron-phonon" interaction, hence heat dissipa­ tion). There is a threshold field above which the latter cannot keep up with the former, and the combined system (electrons plus phonons) "runs away"; that is to say, collectively it switches to a new state.