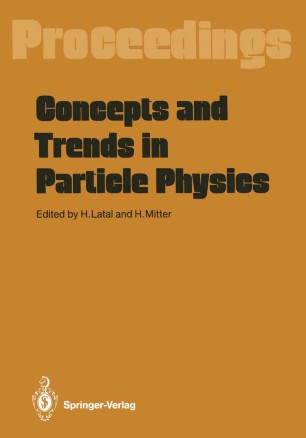 Concepts and Trends in Particle Physics

Twenty-five years of Schladming Winter School 1. The Start Twenty-five years ago P. Urban had the idea of organizing a winter school in the Austrian mountains. The very concept of a school was not new: to bring physicists together in an environment which differs totally from the daily world of institutes and laboratories, to contrast hard classroom work in lectures by distinguished speakers with a relaxed atmosphere, to provide opportunities for entering newly developing fields and exchanging ideas, all this had already resulted in a few summer schools in southern Europe and the US. The idea of combining physics with skiing rather than swimming was, however, new. After some sampling by a few younger members of Ur­ ban's group, Schladming was selected as an appropriate place. At that time skiing was not very much developed here; there were few lifts, but a road to Hochwurzen and a regular bus service opened at least one longer track. The first meeting took place in a classroom of the local school, w here some 40 participants were squeezed into benches designed for children. In the next year we moved into the dining hall of a small inn, which does not exist any more (an attempt to serve beer during the lectures was stopped by the orga­ nizing committee). Only in later years did we find a permanent home here in the Stadtsaal.