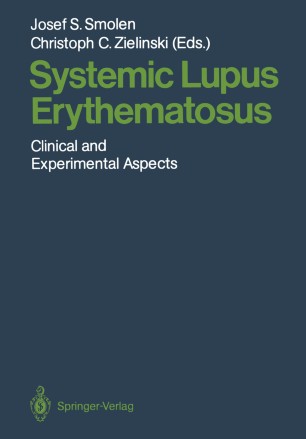 More than 140 years ago, lupus erythematosus (LE) was recognized as a disease entity by clinicians working in the field of dermatology, which had only recently become an independent medical discipline. Soon after cutaneous lupus was first reported, it was realized that, apart from the skin, the disease could involve other organs and thus be systemic in nature. The latter observations were first made by MORITZ KApOSI [1], whose work has attracted renewed attention re­ cently and who succeeded FERDINAND VON HEBRA to the chair of dermatology at the Medical Faculty in Vienna. The early description of lupus erythematosus in both its cutaneous and systemic manifes­ tations was thus intimately associated with Vienna and its Medical School. The next phase in the study of lupus was characterized by an in­ crease in knowledge of the type and extent of organ involvement. The work by OSLER [2], LIBMANN and SACKS [3], and KLEMPERER [4] best represents these advances. The increase in clinical knowledge of LE finally led to DUBOIS' famous monograph [5], which was pub­ lished at a time of renewed interest in SLE, elicited by the descrip­ tion by HARGRAVES et al. [6] of the LE-cell phenomenon. A more detailed analysis of this finding revealed that the disease was charac­ terized by an abnormal immune response, although its pathogenetic implications were still unclear.