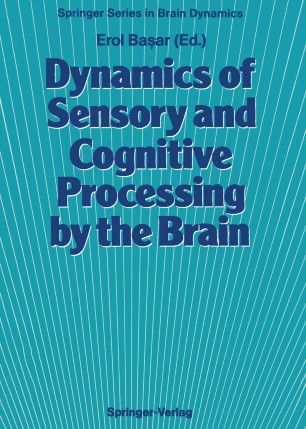 Dynamics of Sensory and Cognitive Processing by the Brain

In neurophysiology, the emphasis has been on single-unit studies for a quarter century, since the sensory work by Lettwin and coworkers and by Hubel and Wiesel, the cen­ tral work by Mountcastle, the motor work by the late Evarts, and so on. In recent years, however, field potentials - and a more global approach general­ ly - have been receiving renewed and increasing attention. This is a result of new findings made possible by technical and conceptual advances and by the confirma­ tion and augmentation of earlier findings that were widely ignored for being contro­ versial or inexplicable. To survey the state of this active field, a conference was held in West Berlin in August 1985 that attempted to cover all of the new approaches to the study of brain function. The approaches and emphases were very varied: basic and applied, electric and magnetic, EEG and EP/ERP, connectionistic and field, global and local fields, surface and multielectrode, low frequencies and high frequencies, linear and non­ linear. The conference comprised sessions of invited lectures, a panel session of seven speakers on "How brains may work," and a concluding survey of relevant methodologies. The conference showed that the combination of concepts, methods, and results could open up new important vistas in brain research. Included here are the proceedings of the conference, updated and revised by the authors. Several attendees who did not present papers at the conference later ac­ cepted my invitation to write chapters for the book.