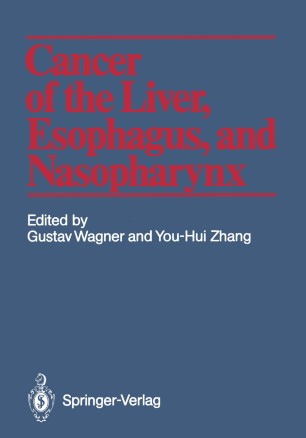 Cancer of the Liver, Esophagus, and Nasopharynx

To stimulate greater German-Chinese cooperation in the field of oncology, the Ger­ man Cancer Research Center (DKFZ) carried through a "Chinese-German Sympo­ sium on Cancer of the Liver, the Esophagus, and the Nasopharynx" in Heidelberg from 3 to 5 July 1985. These three forms of cancer were chosen as they are extremely rare in Europe but some of the most frequently found forms in China. Almost half of the roughly 260000 cases of primary liver cancer occurring annually worldwide are Chinese; of the roughly 300000 esophagus cancers occurring annually, more than half are Chinese; nasopharyngeal cancer is roughly 100 times more frequent among Chinese people than in Caucasians. Under these circumstances, it is not surprising that the Chinese guest speakers of the Heidelberg symposium - selected specialists in the three subsections of oncolo­ gy mentioned - were able to report about extensive experiences with patient popu­ lations of a size hardly imaginable in Europe. The great clinical experience of the Chinese guests was supplemented by special contributions of European experts. Thus, this volume permits a topical survey of the state of the art in these three can­ cers, with subsections of epidemiology, pathology, and clinical treatment. The editors wish to thank the Federal Ministry of Research and Technology (BMFT) for their encouragement and direct help in preparing and carrying through the symposium, the Management Board of the DKFZ for their generous assistance and Springer-Verlag for the publication and excellent production of this volume.