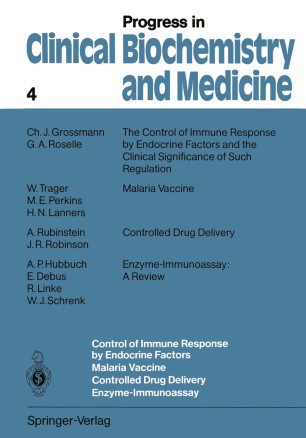 Part of the Progress in Clinical Biochemistry and Medicine book series (PCBM, volume 4)

Malaria is a disease of long duration and chronicity. Typical infections with Plas­ modium vivax or P. ovale last 2 to 3 years, with periodic remissions and relapses. P. malariae may persist as a latent inapparent infection up to 50 years. Even with P. Jalciparum, the most highly pathogenic species of human malaria, immunity de­ velops only slowly l). Under natural conditions in a holoendemic region where expo­ sure to reinfection is frequent and sustained, children that survive their initial infec­ tions show an enlarged spleen and are likely to continue to show parasites until puber­ ty, or even beyond. In such a region adults do not have a markedly enlarged spleen, rarely show parasites and are rarely ill with malaria. This acquired immunity is effec­ tive mainly against the local strains of falciparum malaria and fades rapidly if the individual lives for some months in a non-malarious region. Nevertheless, if such an immunity could be induced earlier by vaccination, and especially if it could be induced in young children, many lives would be saved and much illness prevented. An effective vaccine would also serve as an additional tool which, combined with mosquito control measures and appropriate chemotherapy, might greatly reduce the incidence of malaria. Clearly a vaccine could also be useful for the protection of short term visitors to malarious regions. Such protection is becoming increasingly difficult to provide as drugresistant strains of P. Jalciparum continue to spread 2).