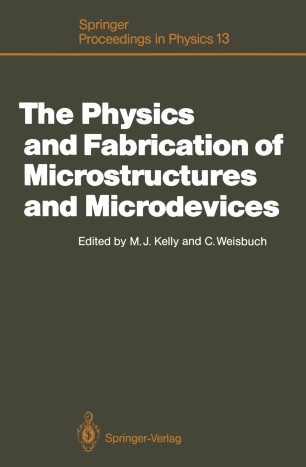 The Physics and Fabrication of Microstructures and Microdevices

les Houches This Winter School on "The Physics and Fabrication of Microstructures" originated with a European industrial decision to investigate in some detail the potential of custom-designed microstructures for new devices. Beginning in 1985, GEC and THOMSON started a collaboration on these subjects, supported by an ESPRIT grant from the Commission of the European Com­ munity. To the outside observer of the whole field, it appears clear that the world effort is very largely based in the United States and Japan. It also appears that cooperation and dissemination of results are very well organised outside Europe and act as a major influence on the development of new concepts and devices. In Japan, a main research programme of the Research and Development for Basic Technology for Future Industries is focused on "Future Electron Devices". In Japan and in the United States, many workshops are organised annually in order to bring together the major specialists in industry and academia, allowing fast dissemination of advances and contacts for setting up cooperative efforts.