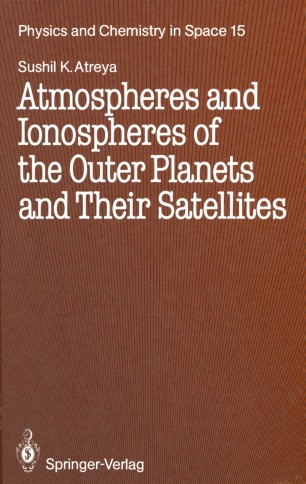 Atmospheres and Ionospheres of the Outer Planets and Their Satellites

Part of the Physics and Chemistry in Space book series (SPACE, volume 15)

One of the most fundamental discoveries of the solar system was the detection of four moons in orbit around Jupiter by Galileo Galilei in 1610. The discovery was significant not only in the context of Jupiter; it gave credence to and was instrumental in firmly establishing the heliocentric system of Nicolaus Copernicus. Almost four centuries after Galileo's discovery, exten­ sive observations by the two Voyager spacecrafts have once again revolu­ tionized our thinking about the major planets, their composition, structure, origin, and evolution. This book is an attempt at summarizing our present understanding of the atmospheres and ionospheres in the outer solar system, with particular emphasis on the relevant physics and chemistry. I was motivat­ ed to prepare this manuscript for the following reasons. First, after under­ going rapid expansion in the recent past, the subject has finally attained suf­ ficient maturity to warrant a monograph of its own. Second, I have felt that as a result of recent observations, new and challenging problems have arisen whose resolution requires unconventional analysis and theoretical interpreta­ tion of existing data, as well as the collection of new kinds of data. I believe the time is ripe to put these issues in the appropriate scientific perspective, with the hope of stimulating novel theoretical, observational, and laboratory studies. I have highlighted the significant scientific problems throughout the book, especially at the end of each chapter.