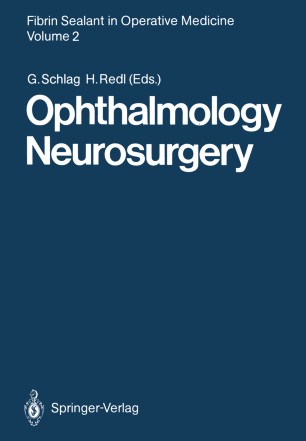 Fibrin plays a prominent role in wound healing. It has a hemostatic effect, induces cellular response to wound damage, and, by forming strands to build a matrix, assists in neovascularization and fibroblast proliferation. The concept of using clotting substances from human blood for wound manage­ ment and to achieve hemostasis in bleeding parenchymatous organs can be traced to 1909, when Bergel [1] reported on the hemostatic effect of fibrin powder. In 1915, Grey [3] employed fibrin to control bleeding in neurosurgical operations of the brain. A year later, Harvey [4] used fibrin patches to stop bleeding from parenchy­ matous organs in general surgery. It took more than two decades for this ingenious idea to be rediscovered. In 1940, Young and Medawar [8] reported on experimental nerve anastomosis by sealing. Similarly, Tarlov and Benjamin [7] reunited nerves with plasma clots in 1943. Tarlov improved the results obtained with clot anastomosing of nerves by avoiding tension at the nerve stumps. In 1944, Cronkite et al. [2] reported on an initial series of eight cases in which fibrinogen and thrombin had been used successfully for anchoring skin grafts.