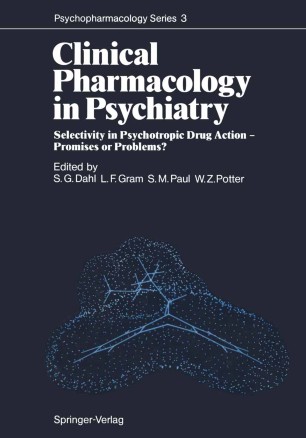 The Fourth International Meeting on Clinical Pharmacology in Psychiatry was held in Bethesda, Maryland on 5-8 September 1985 and was dedicated to the memory of Dr. Earl Usdin. Earl was one of the organizers of the three previous meetings held in Chicago (1979), Troms0 (1980), and Odense (1982). During the organization of the fourth meeting Earl became ill and had to relinquish his role as one of the principal organizers. It is safe to conclude that there was no better, or more professional, or more efficient an organizer of scientific meetings in the field of neuropharmacology and psychiatry than Earl U sdin, and it was quite a task for the remaining organizers to fill the void left when he withdrew from this one. Those of us who have organized previous meetings with Earl were struck by how much more difficult our work became without him. This obviously speaks well for his subtle (and at times not so subtle) organizational skills. Nevertheless, in Earl's memory the organizers proceeded to invite a group of internationally renowned neuropsychopharmacologists to address the problem of selectivity in psychotropic drug action and to try to reconcile the amazing advances in basic preclinical neuropsychopharmacology with the problem of clinical specificity encountered by the psychiatrist.