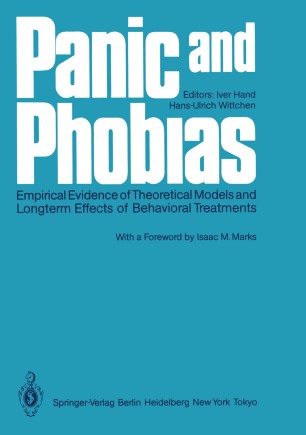 Isaac Marks, Institute of Psychiatry, London Human emotion seems to have changed Westphal's perceptive label. Many factor analytic studies in Europe and the USA since DSM-III burst on the world in 1980. The mere fear or anxiety that people used showed that fears of public places are sali­ ent in this problem, and that such agora­ to feel has been transformed into dramatic phobic panic and avoidance was also fre­ panic attacks, and it has become vital to know whether 3 of these occurred over the quently accompanied by other nonphobic (nonsituational) features like tonic tension last 3 weeks. A rash of papers has appeared proving that 'panic disorder' is a disease and phasic panics independent of any with a specific genetic background, child­ special cue, depression and depersonal­ hood antecedents, biological markers, and ization. Unlike agoraphobia, panic is a pharmacological treatment. With alacrity rather nonspecific term. Spontaneous panic 'panic disorder' has been clutched to the is almost as frequent in anxious depression psychiatric bosom as proof of our medical as in panic disorder, while phobic panic is a identity. hallmark of nearly all severe phobias, be Alas, we have been here before. Did not they specific, social or agoraphobias.