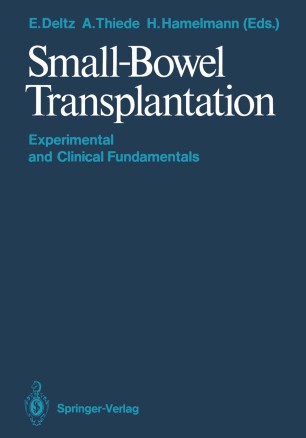 In contrast to the continuously increasing success in kidney, liver, heart, and pancreas transplantation, small-bowel transplantation has not shown simi­ larly impressive progress until recently. The few clinical attempts at small-intestinal transplantation in the late 1960s and early 1970s were unsuccessful. In spite of these initial failures, a few groups of surgeons continued to investigate the problems of small-bowel transplantation from the technical, functional, and immunologic point of view. Now, about 15 years later, conditions have changed. Total parenteral nutrition has made tremendous progress, thus maintaining patients with short-bowel syndrome who are potential recipients of small-bowel grafts in an acceptable physical condition. Immunologists and clinicians have furt­ hermore been able to expand our knowledge of basic immunologic reactions induced by transplanted organs. In addition, within the last 8 years, new immunosuppressive drugs and regimens have been introduced which have proved to be extremely effective. Taking all these aspects into account, we regarded it as an extremely worthwhile and effective undertaking to invite scientists from all over the world who are working in the field of small-bowel transplantation to participate in a symposium on this topic. This meeting, the first to deal exclusively with small-bowel transplantation, was held in Kiel, West Ger­ many, in October 1985. Its aims were twofold: 1. ) To'stimulate direct communication between basic scientists and clini­ cians 2.