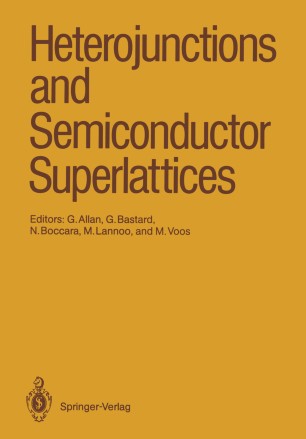 The Winter School held in Les Houches on March 12-21, 1985 was devoted to Semiconductor Heterojunctions and Superlattices, a topic which is recognized as being now one of the most interesting and active fields in semiconductor physics. In fact, following the pioneering work of Esaki and Tsu in 1970, the study of these two-dimensional semiconductor heterostructures has developed rapidly, both from the point of view of basic physics and of applications. For instance, modulation-doped heterojunctions are nowadays currently used to investigate the quantum Hall effect and to make very fast transistors. This book contains the lectures presented at this Winter School, showing in particular that many aspects of semiconductor heterojunctions and super­ lattices were treated, extending from the fabrication of these two-dimensional systems to their basic properties and applications in micro-and opto-electron­ ics. Among the subjects which were covered, one can quote as examples: molecular beam epitaxy and metallorganic chemical vapor deposition of semi­ conductor compounds; band structure of superlattices; properties of elec­ trons in heterojunctions, including the fractional quantum Hall effect; opti­ cal properties of two-dimensional heterostructures; quantum well lasers; and two-dimensional electron gas field effect transistors. It is clear that two-dimensional semiconductor systems are raising a great deal of interest in many industrial and university laboratories. From the number of applications which were received and from the reactions of the participants, it can certainly be asserted that this School corresponded to a need and came at the right time.