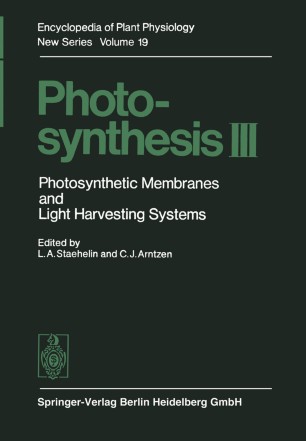 The Encyclopedia of Plant Physiology series has turned several times to the topic of photosynthesis. In the original series, two volumes edited by A. PIRSON and published in 1960 provided a broad overview of the entire field. Although the New Series has devoted three volumes to the same topic, the overall breadth of the coverage has had to be restricted to allow for greater in-depth treatment of three major areas of modern photosynthesis research: I. Photosynthetic Elec­ tron Transport and Photophosphorylation (Volume 5 edited by A. TREBST and M. AvRON, and published in 1977); II. Photosynthetic Carbon Metabolism and Related Processes (Volume 6 edited by M. GIBBS and E. LATZKO, and published in 1979); and III. Photosynthetic Membranes and Light-Harvesting Systems (this volume). As we approached the organization of the current volume, we chose a set of topics for coverage that would complement the earlier volumes, as well as provide updates of areas that have seen major advances in recent years. In addition, we wanted to emphasize the following changes in the study of photo­ synthetic systems which have become increasingly important since 1977: the trend toward increased integration of biochemical and biophysical approaches to study photosynthetic membranes and light-harvesting systems, and a renewed appreciation of the structural parameters of membrane organization.