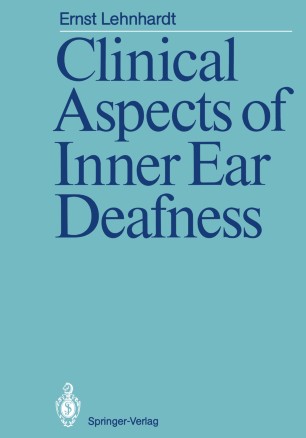 The work on clinical aspects of inner ear deafness started out in 1983/1984 as a general review conceived by the Deutsche Gesellschaft fUr Hals-Nasen-Ohren-Heilkunde, Kopf-und Hals-Chirurgie (German Society for Oto-Rhino-Laryngology and Head and Neck Surgery) under the presidency of Professor Harald Feldmann, Munster. My task was to sift through the literature available at that time, to record the current status of knowledge, and if appropriate to describe existing new tendencies and potential developments. It was a conscious decision that the subject matter should extend to the entire field of inner ear deafness, though without reproducing too much of the detail given in the reviews already available, such as those by Vosteen (1961) on the biology of the inner ear, Beckmann (1962) on deafness in children, and Lehnhardt (1965) on industrial otopathies. The text contains only brief references to these, followed by more detailed expositions of what has come to light in the interim. In keeping with the broadness of the topic the list of references is extremely long, though we are aware that it is still not absolutely comprehensive. It is intended to give readers interested in specific topics an idea of the literature available and to provide a point of departure for further work. Scientific research is progressing and news insights appearing so fast, however, that the topicality of the material will be limited.