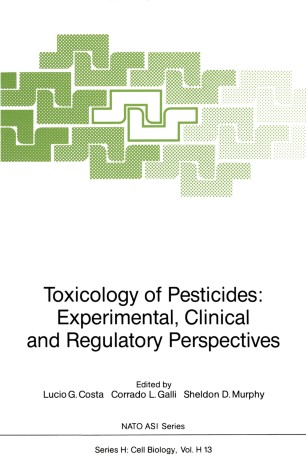 The protection of human health and food and fiber resources against the ravages of pests of many sorts is a continuous struggle by all people in the world. The use of chemical pesticides as an aid in this struggle is now also global. These chemicals are deliberately added to the environment for the purpose of killing or injuring some form of life. Because pesticides are generally less selectively toxic than would be desired, non-target species, including humans, must be protected from injury by these chemicals. This can only be achieved by thorough understanding of the comparative toxicology of these compounds, and by minimizing human (and other desirable species) exposure. The latter can only be achieved by sound regulatory policies that utilize scientific principles and data, properly tempered by both gaps in that data and sociologic and economic considerations. This book contains the proceedings of the NATO Advanced Study Institute on "Toxicology of Pesticides: Experimental, Clinical and Regulatory Perspectives" held in Riva del Garda on October 6-15, 1986. This NATO-ASI has been promoted by the School of Public Health and Community Medicine, University of Washington at Seattle, by the Institute of Pharmacological Sciences, University of Milano and by the Giovanni Lorenzini Foundation, and has been sponsored by both the Society of Toxicology (USA) and the Italian Society of Toxicology.