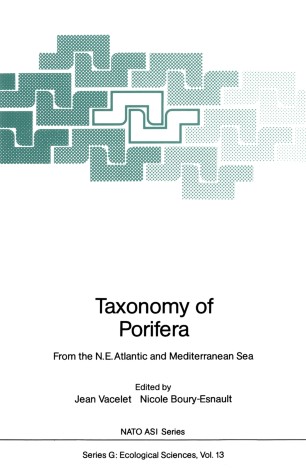 From the N.E. Atlantic and Mediterranean Sea

Although sponges are one of the major components of littoral ecosystems, their systematics obviously lags behind that of the majority of other groups of marine invertebrates. Also the evolutionary trends in these most primitive of the Metazoans are poorly understood. The confused state of their taxonomy and the difficulties with their identification prevent their use in ecological studies. The emphasis of interest presently seems to have shifted towards chemistry, but many of the hundreds of interesting chemicals recently described in sponges pro­ bably have been found in mistakenly or imprecisely identified animals. This situ­ ation will become worse in the next few years, when a number of experts will retire and will not be replaced by new ones, owing to the difficulties that the science of systematics is facing in most countries - as exemplified during this meeting by an informal discussion on the endangered future of European Museums. Under these circumstances, it is the responsability of present sponge taxono­ mists to leave a less confused state and tools such as simple fauna or computerized data bases to generations following. These tools do not exist even in one of the best studied areas, the North-Eastern Atlantic (including the Mediterranean Sea).