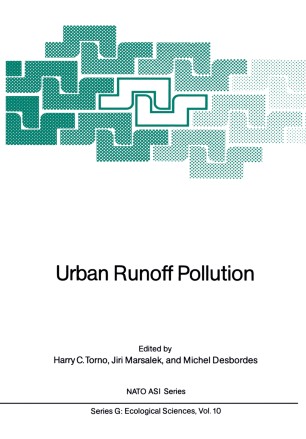 In most of the developed countries of the,World, significant efforts to control the pollution of surface waters have been underway for decades, and particularly the last 10-15 years. These efforts have focused mainly on eliminating or mitiga­ ting the effects of point sources of pollution. In many ca­ ses, however, it is clear that we have achieved only limited improvement in water quality, and that non-point sources of pollution are going to control any further improvement. It has long been known that urban runoff is a major non-point source, and much research has been done in an attempt to un­ derstand the mechanisms and processes which govern this source and to reduce or eliminate its impacts. Many urban jurisdic­ tions have adopted urban runoff pollution control measures, in spite of the fact that there is a great deal that we still do not know, and without really being able to quantify the benefits achieved. A major problem is that while a great deal of work is being done, both in Europe and North America, it is very difficult to keep abreast of new developments. The Urban Water Resources Research Council of the American Society of Civil Engineers has for many years had as one of its major objectives the transfer of urban runoff technology among researchers and practitioners in the field, as well as to those engineers who are not in the forefront but who nonetheless need the information on the latest developments.