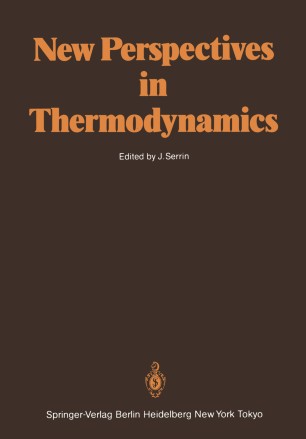 The material included in this book was first presented in a series of lectures de­ livered at the University of Minnesota in June 1983 in connection with the con­ ference "Thermodynamics and Phase Transitions". This conference was one of the principal events in the first year of operation of the Institute for Mathematics and its Applications (lMA) at the University of Minnesota. The Institute was founded under the auspices of the National Science Foun­ dation of the United States and the University of Minnesota and is devoted to strengthening and fostering the relation of mathematics with its various applica­ tions to problems of the real world. The present volume constitutes an important element in the continuing pub­ lication program of the Ipstitute. Previous publications in this program have ap­ peared as lecture notes in the well-known Springer series, and future ones will be part of a new series "IMA Volumes in Applied Mathematics". Preface Until recently it was believed that thermodynamics could be given a rigorous foundation only in certain restricted circumstances, particularly those involving reversible and quasi-static processes. More general situations, commonly arising in continuum theories, have therefore been treated on the assumption that inter­ nal energy, entropy and absolute temperature are a priori given quantities, or have been dealt with on a more or less ad hoc basis, with emphasis for example on various types of variational formulations and maximization rules.