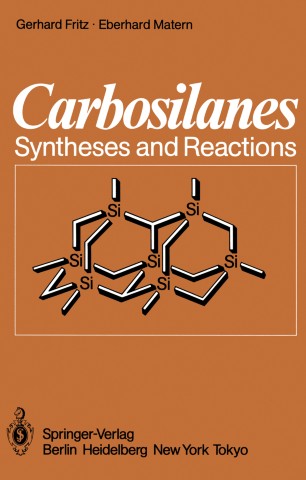 Carbosilanes are compounds in which the elements silicon and carbon alternate in the molecular skeleton [1]. Just as the alkanes are formally derived from the diamond lattice and the aromatics from the graphite lattice, the carbosilanes are structurally derived from silicon carbide. Because of the tetravalent nature of silicon and carbon we can expect stable linear, cyclic and polycyclic compounds to occur. However, carbosilanes do not exist in nature. This book is an attempt to give a summarized presentation. Carbosilanes are, of course, part" of organosilicon chemistry, but their behavior differentiates them distinctly from other organosilicon compounds. The differences result primarily from the alternating Si-C-Si arrangements in the molecular skeleton, and especially the various methylene bridges (CH , CHX, CX ; X = halogen) cause changes in z z Si-C bond polarization and hence influence the reaction possibilities. It is convenient to regard carbosilanes as similar to silicones except that the oxygen bridges of silicones are replaced by methylene units. However, this does not accurately account for all the chemical properties of these compounds. Carbosilanes are related more directly to silicon carbide, as shown occasionally by the reactive behavior of polycyclic car­ bosilanes. Therefore, in view of the present interest shown for thermally stable cera­ mics of unusual character, interesting possibilities arise for further development. Most cyclic carbosilanes can be classified in two groups: the carborundanes and the Si-scaphanes. Compounds belonging to the carborundane class maintain Si-C six-membered rings in the boat conformation.