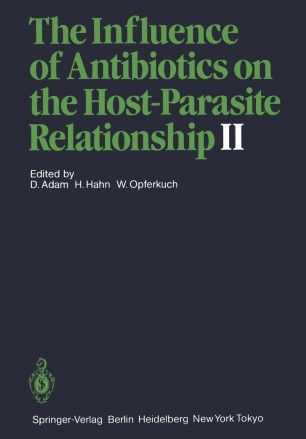 The Influence of Antibiotics on the Host-Parasite Relationship II

The Second International Symposium on "The Influence of Antibiotics on the Host­ Parasite Relationship" was held in Munich, F. R. G. , from March 28 to 30,1985. The topics of the meeting dealt with the aspects of changes in bacterial metabolism and structure which occur under the influence of antibiotics, and with the effects of such changes on the antibacterial host resistance. The influence on pathogenicity factors, changes in the outer membrane of bacteria, as well as the influence on the individual components of the defence system were analysed in detail. In addition, these studies showed that antibiotics proved to be an excellent tool for the examination of bacterial physiology, so that, 50 years after the introduction of antibiotics, additional important knowledge can be gained about the effect of these substances on bacteria. Considering the observations reported, it appears justifiable to postulate that new antibiotics should be routinely tested with respect to their possible effects on antiinfectious resistance. Of course, a consensus will have to be found on which to base methods and criteria employ€d. The symposium documented an increasing interest of microbiologists and clini­ cians for this field of research. It would not have been possible to organize it without the substantial support of the Paul Ehrlich Society as well as of Squibb-Von Heyden Pharma, Inc. Particular help concerning the organization has been given by Werner Kremer of Squibb-Von Heyden Pharma.