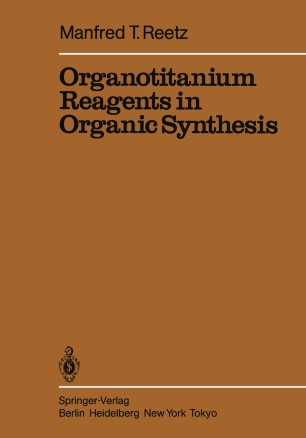 Titanium has been used to perform many kinds of reactions in organic and inorganic chemistry. The present book is concerned primarily with a new development in titanium chemistry which is useful in organic synthesis. In 1979/80 it was discovered that the titanation of classical carbanions using C1TiX leads to species with reduced basicity and reactivity. This increases 3 chemo-, regio-and stereo selectivity in reactions with organic compounds such as aldehydes, ketones and alkyl halides. Many new examples have been reported in recent times. Since the nature of the ligand X at titanium can be widely varied, the electronic and steric nature of the reagents is easily controlled. This helps in predicting the stereochemical outcome of many of the C-C bond forming reactions, but the trial and error method is still necessary in other cases. One of the ultimate objectives of chemistry is to understand correlations between structure and reactivity. Although this goal has not been reached in the area of organotitanium chemistry, appreciable progress has been made. A great deal of physical and computational data of organotitanium compounds described in the current and older literature (e. g. , Ziegler-Natta type catalysts) has been reported by polymer, inorganic and theoretical chemists. It is summarized in Chapter 2 of this book, because some aspects are useful in understanding reactivity and selectivity of organo­ titanium compounds in organic synthesis as described in the chapters which follow.